I’m back from my holiday in the Mayor and Cabinet’s Office! This sojourn into political territory was uncharted for me and I’m pleased to return better informed about the machinations of elected office. I was previously entirely ignorant of the remit of the Office, relying heavily on the West Wing for prep.

One of the primary duties of the Office is to respond to residents’ enquiries. This ‘casework’ arrives via email, letter, Twitter or even directly as the Mayor, Philip Glanville, goes about his day. Each enquiry is logged and forwarded to the relevant service for a response and the Office then replies back to the resident. It sounds simple, however, some residents are turning to the Mayor as a last resort and their queries are complex and multi-faceted. Some queries involve more than one service; some services are faster to respond than others; some queries, indeed, involve external agencies. All of this takes time and the officers really do go beyond the call of duty, and 9 to 5, to meet targets. I was involved in sending out responses and, when someone has a troubling story to tell, you can’t help but feel the weight of responsibility when you are the one pressing SEND on the reply. Still, the Office, led by Ben Bradley and deputy Alison Potter, is a chipper bunch and good spirits are maintained. Sometimes with Skittles.

Hackney is a campaigning council, and actively participates in government discussions that affect residents. With 34,000 private renters in Hackney and 68% of Londoners supporting some kind of rent control (eg open-ended tenancies, caps on rent rises), I prepared briefing notes for a parliamentary roundtable on the private rental sector. This followed a Labour Policy Group meeting between the Mayor, Cabinet members and services where I learnt about the Capital Letters programme and Homelessness Strategy, as well as alterations to Hackney Central station.

My shadowing coincided with a central government reshuffle and I researched mini-biogs for the Office about the new Cabinet appointees. We’re primarily interested in subjects pertinent to Hackney and I trawled through interviews, speeches and Hansard to gather their views on our big issues such as housing, fair funding and social care. Many of the newbies have been promoted from the outer reaches of the backbenches – an interesting fact in itself – and details were occasionally scant. It remains to be seen if the new Chancellor, Rishi Sunak, will hold to his earlier conviction that ‘un‑ring‑fenced resources are better and local authorities should be empowered to decide how to prioritise money’; or whether funding will come from the Government with strings attached.

You can take the girl out of HackIT but… naturally, I took Postits with me. One task was to map out stakeholders around the new strategy for an inclusive economy. It turns out there’s barely a sector unaffected by this and I hope my attempts to redecorate the walls of the office with sticky notes (not too sticky, Facilities) have at least covered most of the bases. I would hate to exclude anyone from the inclusive economy.

It’s budget time and, every year, the Mayor films a video explaining its ins and outs. I had great fun working with the Mayor, Helen Clarke and the camera crew. Though, I think it’s fair to say my inability to secure coffee on a freezing day means my days as a runner are numbered. Though the Mayor himself barely raised a shiver as an icy chill whipped around Shoreditch Park. I was very impressed by a local kid’s ability to recognise the Mayor, and so ensued half an hour of autographs and questions in the adventure playground next door. No doubt leaving them with a story to tell, memories to hold and a business card to brandish.

I had the pleasure of encountering several councillors during my visit, many in the Cabinet. I was particularly pleased to meet Councillor Williams, Cabinet member for Employment, Skills and Human Resources. When I was considering coming to Hackney, I read a piece by her on the importance of flexibility in the workplace. Having resigned from a job where my request to leave a paltry two hours early on a Friday was ignored not once but three times, it was her words that convinced me to apply to Hackney.

The Mayor and Cabinet Office also incorporates the Speaker. At Hackney, ceremonial duties are enacted by a Speaker who has been nominated by fellow councillors for an annual term. I had the pleasure of accompanying the current incumbent, Councillor Kam Adams, to a local primary school where he’d been invited to speak to the children about the Council and his role. It’s quite the palaver fitting the heavy robes and chain but the end result is suitably pomp. You can view the regalia yourself in the vaults at the Town Hall. The children were rapt during assembly – though I wondered if some of Nursery thought the important man in red was Father Christmas – and asked all manner of questions of the Speaker, including ‘How old are you?’. He took it well.

Having been the delivery manager on the ‘Re-engineering Hackney content’ project, I am well aware of the vast range of services provided by the Council. I cannot imagine how the Mayor manages to keep track of it all whilst also planning long term strategies and considering the wider political context. I now know that he is ably supported by an expert, but really quite small, troupe of personnel in his Office. They are preparing papers, answering enquiries, planning events, organising diaries and generally helping to keep the show on the road. During my brief stay, I was able to share aspects of Agile we use in HackIT that may be beneficial to the team and I hope they are able to put some of the ideas into practice.

They are only over the road. Pop over, say hello, and see if you can spot any Postits. 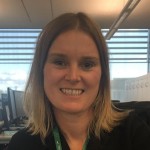